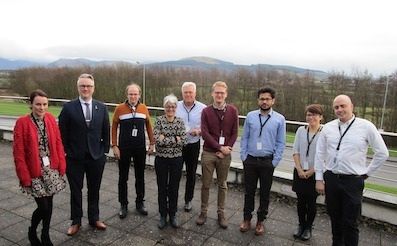 The Redundant Active Handling Facility at Sellafield represents one of the UK’s most complex decommissioning challenges and historical assets on the site. 70 years old, repurposed numerous times, then safely maintained within a Care and Surveillance routine for around two decades; the facility has been described as a ‘museum’ of the UK’s nuclear legacy.

In June 2018, the development of a decommissioning strategy for this facility was tasked to Lot partners through the Decommissioning Delivery Partnership framework. Rising to the challenge was the ADAPT consortium, comprising of partners Orano, Atkins and Doosan (all BECBC members). From the outset, the project was designed to establish a closely collaborative approach between Sellafield and the supply chain, allowing an effective pooling of resources and blend of the innovation and creativity within the project team.

Within its scope, the project requires in-depth management over 30 different activities, from investigations, to demolition, to remote retrievals; all of which are affected by gaps in existing approaches and requiring the team to imagine future states without being able to commit to them with the usual level of certainty. To address this issue, teams from Sellafield Ltd and ADAPT partner and international nuclear fuel cycle operator, Orano, have worked together to create a hybrid of a project and programme approach, breaking down the traditional delivery model; rewriting processes and governance to match the project requirements.

This innovative approach to project management and technical delivery has been supported and enhanced by the innovative working environment, where the project team has been co-located at Orano’s offices in Westlakes Science and Technology Park for the past 18 months. Recognised by key project stakeholders at Sellafield, this innovative working environment will feature in an article in the Spring edition of the Nuclear Industry Associations magazine, ‘Industry Link’.

Andrew Dodd, Senior Project Manager for Sellafield, said: ‘If I had to describe our approach in one word, I’d say it was ‘collaborative’; not collaborative in the abstract sense, but a real, hands-on, down-to-earth collaboration, where you need to bring people together, bring contrasting ideas to the table and address sticking points head-on.’

Marie-Pierre Flamant, Senior Project Manager for Orano, backed up this point, noting that: ‘In essence, this environment allows us to communicate more effectively. We’re working as a multi-national, multi-organisational team so we’ve learnt not only to be sensitive to how we communicate in translation between French and English, we also have also learnt how to translate terminology and points of reference between organisations. We have a culture of verifying what we have understood to create a continuous feedback loop within the team, which allows us to deliver more efficiently and more innovatively than we may have done using just regular update meetings.’

Co-located for over 18 months, the team has already delivered a robust baseline scenario for the facility, along with an estimated Schedule & Cost. The conceptual stage of decommissioning design principles & logic has also now been completed. A programme safety case strategy has been validated to allow the deployment of the enabling works on site. The next step will be to implement this new strategy across the project scope to prove the efficiency of this collaboration, and the potential it holds to inform future phases of the project.