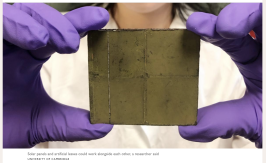 Scientists have developed an “artificial leaf” that can convert sunlight, carbon dioxide and water into a carbon-neutral fuel.

The scientists behind the prototype believe that it marks a significant step towards achieving “artificial photosynthesis” — a process that would mimic the ability of plants to convert sunlight into energy, a cornerstone of life as we know it.

Unlike conventional solar cells the new device produces a liquid fuel, which can be stored, rather than an electrical current.