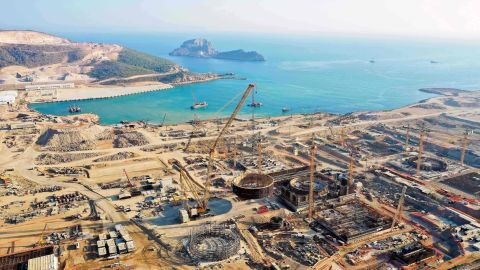 Assystem S.A. (ISIN: FR0000074148 – ASY), an international engineering group, has been selected to oversee the construction of the Akkuyu nuclear power plant (NPP) in Turkey, as part of a major international engineering deal at the end of a tender process conducted in compliance with the Unified Industry Procurement Standard of the State Atomic Energy Cooperation “ROSATOM”.

AKKUYU NÜKLEER ANONİM ŞİRKETİ, part of Russian State Atomic Corporation ROSATOM, awarded Assystem with the new six-year contract that will serve as a continuation to its current role at Akkuyu, delivering supervision of the construction of facilities important to the nuclear safety of the Akkuyu NPP in accordance with the “Regulation on Construction Inspection of NPPs”, that entered into force with the Official Gazette No: 30024, dated 31/3/2017 by the Nuclear Regulatory Authority of Turkey.

The contract will run until August 2026 and will involve the delivery of independent construction inspection of the objects important for nuclear safety with the construction start in 2020-2021. These services are a requirement under regulations on control over construction of nuclear power plants issued by the Republic of Turkey.

This collaboration between Assystem and ROSATOM follows successful cooperation on Akkuyu since 2011 where Assystem, through its Turkish subsidiary Assystem Envy (acquired in 2016), has delivered site parameters monitoring program including initial and design stage site surveys, detailed hydrogeological surveys and site inspection and safety.

In the fight against climate change nuclear power is a secure and stable source of low carbon energy that can support countries with energy transition and meet the rising demand for electricity.

Assystem has over 50 years of experience in supporting civil nuclear programs. The Group puts its recognized expertise as an independent nuclear engineer at the service of the operators of existing nuclear power plants, and of new build projects in countries having already a nuclear park as well as in new entrant countries in this field. Its 3,000 specialized experts use the most advanced numerical tools to ensure compliance with the strictest safety standards and reduce project costs.

“We are very satisfied to be continuing in this key role as construction supervisor at the Akkuyu.

Akkuyu is central to the energy transition in Turkey, delivering a supply of low carbon energy to the network to meet the needs of its dynamic and growing economy as well as creating jobs.

Thanks to this new contract, Assystem will recruit a number of Turkish engineers and cultivate their skills in relation to nuclear engineering, thus building a knowledge base in Turkey that will serve the country for years to come. “