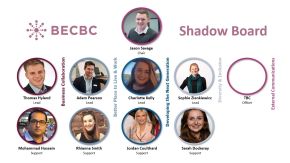 The BECBC Shadow Board is a group of 18–30 year olds who have been brought together to ensure young professionals within the Cluster's membership have a voice in key decisions but also to support, promote and drive wider development and growth opportunities for young professionals in Cumbria. Originally set up in 2018 the Shadow Board has been a key driver for BECBC in the delivery of projects such as Global Reach and AppFit, as well as routine activities such as networking, workshops and focus groups.

The newly appointed Chair Jason Savage (Sellafield Ltd) describes how the Shadow Board is structured: “Although our name suggests we are a ‘Shadow’ of the main Board we actually have complete autonomy and operate in partnership with BECBC Directors to drive the Cluster's objectives forward and deliver on behalf of our members. As a Shadow Board we work within four main themes (Business Collaboration, Developing the Next Generation, Better Place to Live and Work, Diversity and Inclusion) each with a dedicated lead and support. As each Shadow Board member gives their time freely it’s important to have boundaries through dedicated themes, so as individuals and as a team, we can deliver value to our members and our own professional development.”

In June, Rob Ward (Copeland Council) and Alex Grainger (WYG) stepped down from the Shadow Board to focus on other commitments, as well as the previous chair Ruth Sellick (Orano) moving into a role on the main Board, leaving a gap in the groups capacity so new members were sought. After a call for applicants and interviews two new members were chosen, Rhianna Smith from Energus and Jordan Coulthard from James Fisher Nuclear.

Rhianna stepped into a role within the Better Place to Live and Work theme and said “Having only lived in Cumbria for four years, I have grown to love where we live. I think the opportunities we have on the doorstep are incredible, and the Shadow Board’s initiatives in promoting these over the last 2 years has been fantastic. I am passionate about what Cumbria has to offer and I am looking forward to getting started”.

Jordan moved into a role within the Developing the Next Generation theme and said “Throughout my career I have encountered many people who have helped mentor and guide me. I would like to give something back to the community through the Shadow Board by inspiring the next generation, I am equally as passionate about raising the profile of women in engineering.”

The Shadow Board are still looking to recruit one member of the team focused on External Communications and the management of social media and the website – if you’re interested in joining the team get in touch at shadowboard@becbusinesscluster.co.uk.