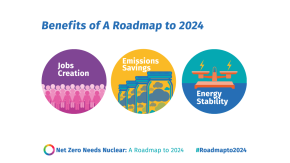 BECBC welcomes All-Party Parliamentary Group recognition of nuclear as the most powerful, efficient and jobs-rich form of low-carbon energy

“The roadmap to Net Zero could not only bring important opportunities for Cumbria but could also put this county at the centre of helping our nation achieve the 2050 net-zero target and create energy and job security. Being involved in its development was important to us in representing our members, many of whom are involved in the nuclear supply chain.” says BECBC’s newly appointed CEO, Dianne Richardson. “BECBC is excited by the prospect for Cumbria to be central to this net zero future. This is where our region is uniquely placed in being able to both be a major player on the supply and demand sides of the equation.”

Find out more in the attached pdf