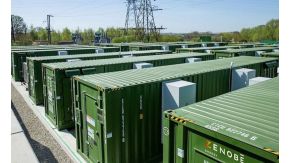 Zenobe has started construction a 50MW/100 megawatt-hours battery storage project, which is he first such facility to connect directly to the transmission system in Scotland.

Centrica, Fluence and H&MV have been chosen by Zenobe as the suppliers for the project in Wishaw, which is being financed by Santander UK.

The site will enable 640 gigawatt-hours of renewable generation to travel from north to south over the next 15 years.

The battery is the first ever to be used as part of National Grid ESO’s Constraints Management pathfinder project, a scheme set up to secure power supply for Glasgow and the surrounding the region, according to the company.

The project is expected to go live by the end of 2022.

Zenobe is working with Centrica as the route to market provider, entering a long-term floor contract which will see Centrica optimise the battery and open access to a variety of revenue streams for the asset.

Fluence has been appointed as the Battery Energy Storage System supplier, and H&MV as the Principal Designer and Contractor respectively.

"Scotland is leading the world in its move to renewable energy and Zenobē is proud to be providing the critical infrastructure needed for the country’s clean energy transition.

"Alongside our partners Fluence, Centrica, H&MV and Santander UK, we’re increasing flexibility of power supply for Glasgow and the wider network and so allowing a greater uptake of renewable energy.

"The battery at Wishaw is the first of a series of major battery flexibility projects by Zenobe and part of the £500m (€594.2m) we intend to invest in Scotland in the next five years."

Fluence managing director for UK, Ireland & Israel Marek Kubik said: "We are pleased to be working with Zenobe to deliver the largest battery-based energy storage system to date in Scotland and the first to be connected directly to the transmission system in the country.

"The project in Wishaw will use the highly configurable Gridstack product with intelligent edge controls that is designed for the most demanding market applications and grid services.

"With the 50MW system being deployed in less than one year, Scotland will be able to benefit from the addition of low-cost, zero-emissions capacity in the near term while it builds towards its 2045 net-zero target."