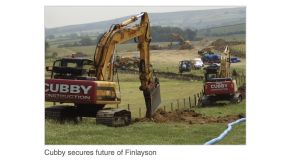 For the last few year Cubby has being holding revenue around the £17m level but now hopes the deal will help to develop its existing operations in southern Scotland.

The deal secures the future of Finlaysons, which was established over 60 years ago, and was originally part of Border Construction until 2014 when it was acquired by Esh Group.