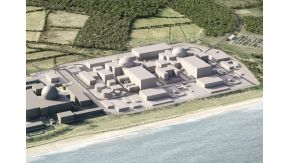 The Government has set out plans to build eight more nuclear power stations in its energy security strategy published today.

It will also ramp up delivery of offshore wind schemes hoping to produce 10GW more than previously planned.

But the long-awaited energy strategy falls short on strong measures to conserve energy with greater energy efficiency from the existing building stock.

The ambitious energy expansion would see 25% or up to 24 GW of UK electricity produced from nuclear power by 2050.

The Government aims to speed up planning, aiming on average to approve a scheme each year to 2030.

This would involve backing construction of the planned two reactors at Sizewell C in Suffolk as the next new scheme after the 3.2GW Hinkley Point project in Somerset.

Other sites mentioned as candidates for nuclear reactors include Wylfa in Anglesey and Oldbury in Gloucestershire.

Subject to technology readiness from industry, Small Modular Reactors will form a key part of the nuclear project pipeline.