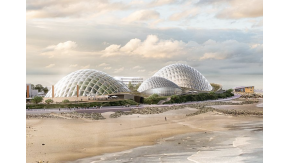 Ambitious plans to build a £125m northern version of Cornwall’s Eden Project on Morecambe Bay’s seafront have got the planning thumbs up.

Backed by Eden Project International, the project will consist of four shell-like domes rising to nearly 40m in height. These will be constructed in timber and covered with a membrane of flexible air-inflated ETFE cushions with integrated solar cells.

Eden has submitted a business case to the UK Government, asking for a £70m public investment in the £125m project. The business case shows that this investment would be paid back many times over in economic benefit for the region.

The Grimshaw-designed project is being delivered by the team behind the first Eden Project, alongside local partners Lancaster University, Lancaster City Council, Lancashire County Council and the Lancashire Enterprise Partnership, and is one of the key projects in Eden’s plans to expand around the UK and the world.