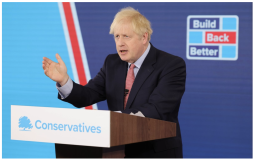 Boris Johnson has pledged that the UK will be powered by offshore wind generation by 2030 in a speech this morning.

As part of his address during the Conservative Party’s virtual conference, the Prime Minister announced the country’s offshore wind generation target is increasing to 40GW. This reaffirms a goal set out by the party in its manifesto in November 2019, and is 10GW higher than the current official target.