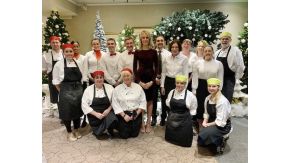 Returning for its third year, Barclays, Baines Wilson LLP (a BECBC member) and Lake District Hotels Ltd have once again hosted Kitchen Rivals charity banquet to raise funds for three local charities. In what has proved the most successful year to date, the event raised £24,060 taking the total raised by Kitchen Rivals since its launch to nearly £60,000. This year’s event raised funds for Cumbria Community Foundation, Carlisle Eden Mind, and Keswick Scouts.

The evening took place at Lodore Falls Hotel & Spa and saw Barclays and Baines Wilson LLP go head to head in the hotel’s kitchen under the strict supervision of Lake District Hotels Executive Chef Mark Harris and his team in a bid to produce the best meal of the night.

At the end of the evening, diners were asked to pay what they felt the meal, drinks and service was worth, with Baines Wilson being declared the winners on the night. £17,670 was raised on the night which included £6,000 of matched funding from Barclays. Cumbria Community Foundation also received matched funding of a further £6,390, bringing the overall total to £24,060.

Joanne Holborn from Baines Wilson commented: “The real winners on the night were our three charities and we are all thrilled by the total raised. We couldn’t have achieved this without the fantastic support of so many businesses, our partners, and of course all the diners that contributed so generously to the event.”

Dani Hope, Director of Lake District Hotels added: “Kitchen Rivals was a huge success; the planning and teamwork over the last two years and during the evening itself has been exceptional. This kind of event is hard work for all involved, but we’re sure you’ll all agree it was well worth the effort and, more importantly, very satisfying that we managed to raise an outstanding amount of money for three well deserving charities.”

Abi Bailey from Barclays commented: “After lots of planning, it’s great to see that this event has been a huge success for another year, providing real benefit to three deserving local charities which support the community in which we live and serve. Roll on the next event.”