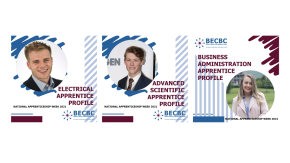 National Apprenticeship Week is a fantastic opportunity to highlight an apprenticeship as a high-quality option for individuals to learn skills, get qualifications and earn a wage while working in a range of businesses and industries. Cumbria is one of the highest rated counties in the country for the delivery of apprenticeships thanks to the diverse skills needed to meet the demands of our fantastic businesses.

Below are profiles of some of our members and the journeys they have had from being apprentices to the high skilled roles they do today.

Thomas joined Balfour Beatty as an electrical apprentice in 2009, working at Sellafield. During his four years as an apprentice, Thomas completed his HNC and became a STEM ambassador, representing the business and supporting the local community. He won awards for apprentice of the year for both Balfour Beatty and JTL Training, who supplied his scheme.

At the end of his apprenticeship, Thomas was selected as the winner of the JIB exchange programme and went on an all-expenses paid trip to live and work in Australia where he gained valuable experience of the global construction industry.

After completing his apprenticeship, Thomas moved across several project across the UK starting as a junior engineer before returning to Sellafield where he has progressed into a project manager role. He has also completed a degree in Electrical and Electronic Engineering and is in his final year of studies towards an MBA.

Charlotte chose her Business Administration apprenticeship as a gateway into a large organisation that she knew would give her the opportunity to grow.

After applying for the Lakes College Apprenticeship Academy, Charlotte secured an interview with Morgan Sindall. She delivered a presentation to their training team to secure her the job.

Her apprenticeship scheme offered fast track route – she completed a Level 3 – 5 in Business Management between 2014 – 2017, and also completed an NVQ in administration that was delivered through coursework & 1 to 1s.

At work Charlotte has done everything from Reception, Personal Assistance, Project Support and Finance but she also loved the classroom atmosphere of the college classes, where she completed her academic qualifications. She said: “you were treated like an adult and free to manage your own time and learning” adding that apprenticeships are “a great way to compete further education whilst earning a wage and can set you apart from peers with less work experience down the line”.

Since his early school days Jack was always interested in science and the environment. When he seen an Advanced Scientific Apprenticeship advertised while completing A-Levels in Geography, Chemistry and English Language, whether to apply or not was a very easy decision.

Jack was successful in his application for Sellafield Ltd after completing an aptitude test and follow-up interviews, which were facilitated by Gen2.

Jack loved that his work in the lab reinforced the things that he learned in his classroom studies at Lakes College and the National College for Nuclear. He added: “I’ve been offered some fantastic opportunities during my employment- things I truly never dreamt of! I’d encourage everyone to consider an apprenticeship, even if they always thought that they’d go to university”.