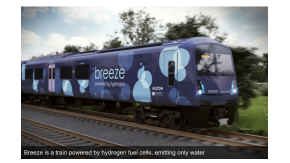 'Now is the moment': Alstom reveals how the UK could pull ahead on hydrogen

BusinessGreen sits down with Nick Crossfield, managing director of Alstom UK and Ireland, to discuss why hydrogen could hold the key to decarbonising the UK's railway network by the government's 2040 deadline.

Some 200 years after the UK's coal industry spurred the development of the world's first railway network, a different fuel could once again establish the country as a major hub for train innovation.

That's according to Nick Crossfield, managing director of Alstom UK and Ireland, who claims the UK has huge potential to become a world leader in the race to develop hydrogen trains as the country works towards its goal of decabonising its rail network by 2040.