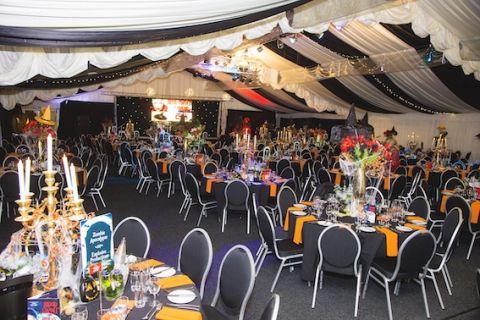 The team at Reays had hoped to raise enough money to purchase a new motorbike for the charity, with their Blood, Sweat & Reays Charity Ball being their finale event. Following the Ball hosted by the business on Saturday 2ndNovember, Reays are delighted to announce that while the final monies are still being counted, they already know that they have raised more than £12,000 on the evening.

Kerrie Allison, Head of Sales and Marketing at Reays said:“We recognise the importance of supporting the local community in which we live and work. Blood Bikes Cumbria are saving lives across our County and I am delighted that our Charity Ball has raised more than £12,000 for such a fantastic cause.

I would like to thank all of the businesses and professionals who supported our event, with special thanks toCarol Milnes of C A Events for organising the event and Explosive Productions for delivering an unbelievable evening of spooktacular entertainment. I am proud that our Charity of the Year initiative generates such a fantastic amount of money for local charities to benefit from.

More than 300 people gathered together for the evening which was organised in association with Arriva Bus & Coach Hire, Ast Signs, Ian Ward Plant Hire, Ashwood Design and Slaters Hair & Beauty, without which, it would not have been possible, and I am incredibly grateful for their support.

Over the next month the Reays team will be finalising their year of fundraising and presenting Blood Bikes Cumbria with a brand-new motorbike which will join their existing fleet. This bike however is smaller in its specification and will be used by the charity to attract more female volunteers.

Each year the Reays team chooses to work with a nominated local charity in order to give something back to the local area and help boost funding for these much-valued services. Applications for Reays 2020 Charity of the Year are now open.

To learn more about Reays Charity of the Year initiative, to make a donation, or to apply to be next year’s chosen charity visit https://www.reays.co.uk/Charity-of-the-Year