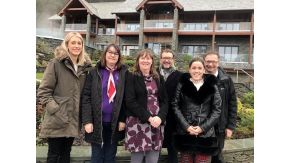 The Kitchen Rivals challenge has now raised £60,000 over the past three years

On the funds raised, Andy Beeforth from Cumbria Community Foundation commented: “Tragically, fuel poverty leads to vulnerable people dying each winter and causes terrible harm to physical health and mental health. The Winter Warmth Fund is being used to help vulnerable, older people in our county. By working with our partners at Age UK, we have been able to reach those most in need.

“We saw the need 10 years ago and have raised £1 million in that time. If you realise something can be done and are probably in a position to do it, then why not get on and do it?

“The amazing generosity of people never ceases to inspire me. I'd like to thank Baines Wilson for their continued support of the Winter Warmth Fund and everyone who attended Kitchen Rivals. Money raised from the event was match funded, meaning we have been able to provide even more support towards heating homes across Cumbria and keeping households warm and healthy."

Jonny Winter, Scout Leader at Keswick Scouts, said: “The support of a major local business like Lake District Hotels really is invaluable to Keswick Scouts. The fundraising will go towards the renovations of Ashness hut. After decades of use we’re looking to renovate this much-used facility so it can continue as a community resource long into the future. Planning permission has been sought to replace the existing hut with a larger hut so as to accommodate two separate dormitory rooms, a leader’s dormitory, a kitchen, two indoor composting toilets, and a dining area.”

Michael Boaden from Carlisle Eden Mind added: “We were delighted to have been nominated by Barclays as one of the charities to benefit from the Kitchen Rivals event. The generosity of all involved in terms of time, energy and financial support is both humbling and inspiring. Every penny raised for us will be used to help local people who may be struggling with mental health issues to ensure that nobody who wants help has to face their problems alone. Thank you.”

The annual event, in which diners donate what they feel the meal is worth, saw Baines Wilson LLP and Barclays going head to head in the kitchen to raise £24,060 for the trio of local charities. The cook-off took place at the Lodore Falls Hotel and Spa in November 2019 with local law firm Baines Wilson emerging victorious on the night.