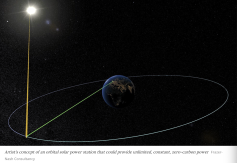 The British government has commissioned a new study looking at the potential to build an orbital solar power station by 2050. Led by Frazer-Nash Consultancy, the new study looks into the feasibility of space-based solar power (SBSP) systems that use giant solar arrays to generate electricity and beam it to Earth in the form of microwaves.

As a major power source, solar panels have a number of disadvantages that have more to do with where they are than what they are. The most obvious drawback is that the Sun sets with aggravating regularity and without it, solar panels are just panels. Also, the Sun moves through the sky, so solar panels either have to settle for a very variable output or they have to include a tracking mechanism that allows them to follow the Sun to maintain the optimum angle.