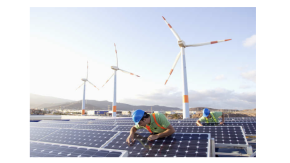 HS1, the country's only high speed railway, said in a statement on Wednesday that its energy supplier had provided certificates confirming that energy used by its trains and at its stations came from renewable sources

Britain's HS1 railway link to the Channel Tunnel is the country's first train line to run entirely on renewableenergy, with wind and solar powering the trains between London and the Kent coast, the operating company said.