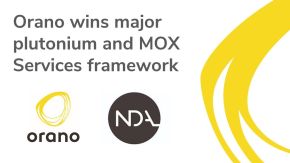 Orano is delighted to announce its success on lots 1 and 2 of the Nuclear Decommissioning Authority’s Plutonium Disposition, MOX Services Framework. With a four-year contract duration, and value of up to £17.5M, this framework will support the development of the NDA’s plutonium disposition strategy. Orano is proud to be supporting this nationally-important work by providing services relating to MOX plant design and MOX pellet manufacturing tests for both immobilisation and re-use options.

The contract forms part of the technical programme that the NDA is establishing to further develop plutonium disposition options. Orano will be working with its key partners to deliver this work which is likely to include a range of desk-based studies as well as testing work on in-active simulants and plutonium in active facilities. Orano is proud to lead these two lots, drawing on decades of experience in its own plutonium and MOX manufacturing and R&D facilities in France, its home-grown expertise in the UK and the capability of its UK partners including the National Nuclear Laboratory, Cavendish Nuclear, NIS, Galson Sciences, Lucideon and the Universities of Manchester and Sheffield.

Arnaud Gay, Executive VP, Technical Department & International Operations of Orano’s Recycling Business Unit, commented: ‘We are proud to be able to bring the plutonium and MOX experience of the wider Orano Group to the UK market through a local platform that has a four-decade-long track record in the UK. We aretherefore able to translate our cultural and operational norms to benefit the Nuclear Decommissioning Authority’s key strategic mission.’

Following the award of this contract, Orano will pursue its growth in the UK. If you would like to be part of our delivery teams, please see our latest vacancies at Orano Projects Limited | Giving nuclear its full value - Recruitment