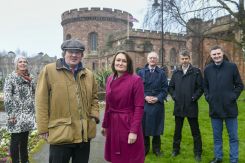 Sir Robert McAlpine has been appointed as sole contractor for this transformational build to create a new University of Cumbria campus in the heart of the city.

We successfully won the tender for the £77.5 million project with a winning bid focussed as much on the social benefits of the new campus, such as jobs and training opportunities, as its construction.

The Carlisle Citadels campus project has been developed by the University of Cumbria, Cumbria County Council, Carlisle City Council, and Cumbria LEP as a key partner.

£50 million of funding for the project is being provided by the Department for Levelling Up, Housing and Communities (DLUHC) through the Borderlands Inclusive Growth Deal with an additional £4million from the Carlisle Town Deal Fund and the university expected to help meet the £77.5 million total cost.

The new campus plans will retain the Grade I listed Citadels rotundas on the proposed site along with other historic and heritage features, including the majority of the Woolworth’s building. The design seeks to open the site and facilities, in a managed way, to the public, allowing it to be accessible, inclusive, and inspirational.

“Today’s contractor announcement takes us another step closer to developing a new university campus in the heart of the city, and we were delighted to welcome Sir Andrew McAlpine yesterday to visit the Citadels site.

“The Citadels project is going to be truly transformational for place and people, increasing the accessibility, reach and impact of our academic offer and bringing more activity, footfall and investment into our city.”

“We are thrilled to have been appointed main contractor on the Carlisle Citadels campus project. Building on 153 years’ experience delivering engineering excellence for our clients, we look forward to working collaboratively with all key partners, the University of Cumbria, Cumbria County Council, Carlisle City Council, and Cumbria LEP and optimising the social value that this scheme will create for the region.”

Following our appointment as contactor, the next stage of the project is to successfully complete the planning application process. It is expected that the main construction work will begin in the first half of 2023, with completion forecasted for spring 2026.

There will be some site preparation work later this year, including archaeological investigations and other construction related survey work.